Easiest Provinces to Get Permanent Residence in Canada 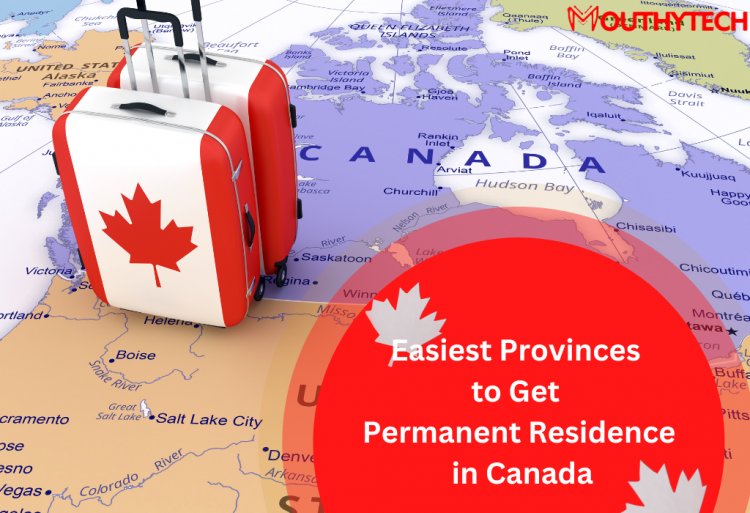 Ten provinces and three northern territories make up Canada. The participating provinces are Alberta, British Columbia, Manitoba, New Brunswick, Newfoundland, Labrador, Nova Scotia, Ontario, Prince Edward Island, Quebec, and Saskatchewan. The three territories s are Yukon, Nunavut, and the Northwest Territories. Their systems of government distinguish a province and a territory. The Canadian Parliament has jurisdiction over the federal government's delegation of authority to its territories. The provinces, on the other hand, may exercise their constitutional powers.

Choosing who they allow to immigrate to the area through Provincial Nominee Programs is one of the most critical ways that Canadian provinces govern themselves (PNPs). The methods used by different regions to entice foreign employees to relocate to their particular area vary depending on the provinces' demands.

Provinces use Provincial Nominee Programs (PNPs) to identify qualified candidates for their area. Both provinces that need to fill labor gaps might greatly benefit from the PNPs because applicants who want to reside in a specific region must possess a skill set that is in demand but lacking in that area.

There are numerous reasons why these five provinces are deemed "easy" to obtain Canadian Permanent Residency (PR) status. In contrast, the distinction between "easy" and "hard" provinces may be arbitrary based on individual skills and provincial requirements.

What is a Provincial Nominee Program (PNP)?

A significant component of Canada's immigration strategy is the provincial nomination programs (PNPs). Eleven of the province's thirteen provinces and territories have PNPs, allowing the area to recruit qualified foreign workers to settle in a particular province. Over 250,000 people will immigrate to Canada through a province nomination procedure between 2021 and 2023. Despite only 11 PNP, foreigners can access more than 80 distinct programs and streams.

While many PNPs need a connection to the province, such as a job offer, employment history, or educational requirement, some programs simply invite individuals based on their ability to fill demographic or labor shortages. The programs on this list typically feature fewer prerequisites, greater rewards that are simple to obtain, or a high quota for inviting individuals, increasing your chances of acceptance. But it's always helpful to know right away if you're qualified.

Here are the five easiest provinces to permanent residence in Canada:

The province of Saskatchewan is located in the middle of the prairies, nestled between Alberta and Manitoba. The southern half o  the province, including Saskatoon and Regina, is home to the bulk of the population of Saskatchewan. Mining, oil, and natural gas extraction are the province's secondary economic sectors after agriculture. Regina, the provincial capital, Saskatoon, and Prince Albert are the main cities. Saskatchewan sports like fishing and hunting are the most popular outdoor pursuits. The ancient Saskato n campus of the University of Saskatchewan is one of the prettiest in all of Canada.

Thanks to its robust economic growth and employment opportunities, Saskatchewan is a popular area for immigrants to reside. Two crucial streams are the Express Entry and International Skilled Worker PNP under the Saskatchewan Immigrant Nominee Program (SINP). They're designed to draw people with expertise in the province's most in-demand vocations. Candidates are chosen for these International Skilled Worker streams using the Canadian Expression of Interest (EOI) system.

Some of the most popular natural attractions in the country are located in Alberta, which is in Western Canada. Natural gas and oil reserves, cattle ranching, the Rocky Mountains, and Dinosaur Provincial Park are some of the provinces of Alberta's most well-known assets. Calgary and Edmonton, respectively, are the fourth- and fifth-most popular cities in Canada among immigrants.

Calgary is the largest city in Alberta in terms of population. Since Calgary is located in the foothills of the magnificent Rocky Mountains, it is a fantastic location for outdoor enthusiasts. Calgary is also home to the legendary Calgary Stampede & Exhibition, one of the largest outdoor rodeos in the world.

Due to its robust job market and top-notch educational system, Alberta is a crucial jurisdiction for prospective immigrants. The Alberta Express Entry stream selects candidates from the federal Express Entry pool to submit requests for provincial nomination. Because this stream admits Express Entry applications with CRS scores as low as 300, more individuals are likely to hear from the province and receive a Notification of Interest.

Ontario is one of the provinces in Canada where obtaining PR is easiest. Because of Ontario's strong economy, immigrants looking for jobs from all over the world commonly decide to settle there. The province of Ontario, which is the location of the well-known city of Toronto, has several business buildings and a thriving way of life. Ontario gives priority to talented individuals who match the roles that are open for employment in the province.

Technically qualified people have long been a source of interest for the Canadian province of Ontario. Candidates who work in emerging fields, including data science, artificial intelligence, and machine learning, are advised. Their human capital priorities align with the government's Express Entry system.

Despite having one of the largest immigrant quotas in the provinces, Ontario wants to bring in even more immigrants. Ontario's Labour Minister Monte McNaughton has suggested increasing the number of immigrants eligible for the Ontario Immigrant Nominee Program (OINP) from 9,000 to 18,000 to help the province's labor shortage. One of the easiest provinces in Canada for qualified candidates to obtain Canadian permanent residency is Ontario, which has significant immigration quotas and routinely holds draws.

Nova Scotia has the second-highest population density in the country despite being the second-smallest province. It is one of the three maritime provinces and a part of Atlantic Canada. The largest cities in Canada's oldest province include Sydney, Wolfville, Peggy's Cove, and Halifax, the provincial capital. One of Nova Scotia's most well-known attractions is the Stronghold of Louisbourg, a National Historic Site with a partially restored 18th-century French stronghold and seafood such as fresh lobster feasts.

Nova Scotia is home to several financial institutions, businesses, and organizations. Candidates who meet the requirements in financial studies may discover outstanding employment opportunities in these reputable financial organizations. Working here almost guarantees immigrants' and their families' future security. It's standard advice for finance professionals to apply for Canadian citizenship through Nova Scotia. Due to its proximity to the sea, reasonable cost of living, and relaxed way of life, the province is the ideal place for many prospective newcomers.

Additionally, candidates are chosen directly under Nova Scotia's Labour Market Priorities using the Express Entry pool. This stream is regarded as one of the easier PNPs for foreign applicants to obtain PR because it typically draws applicants with no connection to the province. Although it routinely welcomes applicants without ties to the province, Nova Scotia does not announce the industry or selection criteria it would be employing before its admission rounds. Candidates must have an active Express Entry profile and indicate their interest in living in Nova Scotia.

Another of the three Maritime provinces, Prince Edward Island (PEI), comprises 232 islands, the largest of which bears the same name. PEI is divided into three main islands. It is the smallest province in Canada in terms of population and land area. The best-known things about Prince Edward Island are the delicious mussels found in the adjacent seas, and the book Anne of Green Gables set there. Charlottetown, the provincial capital, is its largest city.

To get an Interest Letter from PEI, candidates in the federal Express Entry pool must submit a Canadian Expression of Interest. Candidates can apply for provincial nomination after getting a Letter of Interest. Notably, Candidates may submit a Canadian expression of interest without receiving a job offer from a PEI business. Instead, individuals who meet the province's current skill and knowledge requirements for labor will be considered the Express Entry PNP.

How to Apply to the PNP

Here are three easy steps to apply to the Provincial Nominee Programs:

1. Get the right documents ready

Discover which immigration program is most effective for you. There is a list of inquiries that are pertinent to your application. Choose the appropriate application bundle, form, or checklist for the IRCC. On your checklist, cross off every crucial item because missing items may cause a delay. Photocopy all supporting documents and submit them with the checklist or form.

The right to permanent residency fee (RPRF), which is $515, must be paid by applicants. Before moving to Canada permanently, the cost must be paid.

How to pay your application fee:

3. Submit your application through mail

Before submitting your application:

After submitting your application:

Currently, all forms have been delivered. Your application will be reviewed to ensure that all necessary documents have been submitted. Following the processing of your application, you should anticipate receiving an email containing:

The aforementioned details are essential to the processing of your application. Candidates must be qualified for the program or system they are applying for. For your application to be accepted, you must correctly complete all fields and supply all necessary supporting documentation to prevent delays or potential problems. You can contact a regulated Canadian immigration counselor (RCIC) to assist you in the procedure to save yourself the headache.

Furthermore, here are some frequently asked questions about getting permanent residence in Canada.

What is the easiest way to get permanent residency in Canada?

The Express Entry system, the quickest and easiest option for skilled professionals to migrate to Canada, would be the easiest way to obtain permanent residence there. You can convert your temporary residence visa for Canada to a permanent one with the help of the Express Entry system. It assesses people following the points amassed, which may lead to immigration in just six months. The system contains three key categories, each with distinct specifications: Federal Skilled Workers Program (FSWP), Federal Skilled Trades Program (FSTP), and Canadian Experience Class (CEC).

What PNP should I apply for?

Your skills, career, age, experience, and general eligibility all play a role in which PNP you can apply. Your donations must be in line with the province's needs. To determine which PNP you should apply for, you must first determine your eligibility from a trustworthy source. However, the Program for Immigrant Nominees in Alberta (AINP) would be an excellent suggestion. One of the most straightforward programs in Canada for acquiring a nomination for Canada PR and later the PR itself is the Alberta Provincial Nominee Program. The AINP's Express Entry-aligned Stream issues candidates with CRS scores as low as 300.

How long does my PNP last?

Your online account will get an email from OINP notifying you of your nomination if a province, such as Ontario, approves your candidacy. You have 30 days to accept Ontario's nomination under the Express Entry program. As a result of Ontario's nomination, you will receive 600 extra CRS points and an invitation from Immigration, Refugees, and Citizenship Canada (IRCC) to apply for permanent residence. Following IRCC's invitation to apply, you will have 60 days to submit your application for permanent residency.

Mechanical Engineering Jobs in the USA for Foreigners

The Ultimate Guide to UK Student Visas: Requirements, with The Tips Yo...

Apply for Receptionist Jobs in Germany for Foreigners