How to Apply for Canadian Citizenship Online With Representatives

Have you always dreamt of living in Canada? Would you like to become a Canadian citizen? The process can be lengthy, but applying for Canadian citizenship online with representatives from the government can make the application process quicker and easier. Learn more about this option here! 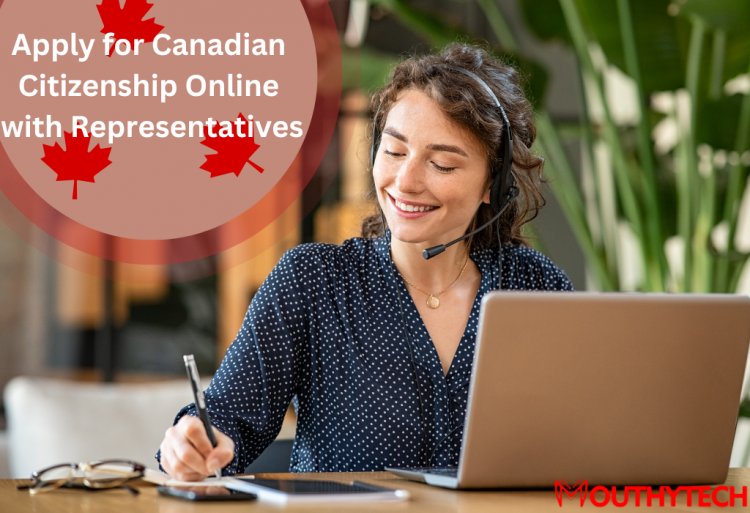 About the Canadian Citizenship Online Application

In late 2020, Immigration, Refugees and Citizenship Canada (IRCC) introduced the online application tool, although it was still being evaluated to see how it would perform in the real world. On August 11, the complete version went live. On November 30, however, the IRCC increased the number of applications it accepted through its online site from applicants with representatives.

This, however, is the most recent step in the modernization of the online application process for Canadian citizenship. Since August, single people have been able to apply for citizenship online. But in 2022, the IRCC will make the online application website available to families (groups), minors under 18, and representatives who wish to submit applications on behalf of their clients and clients who are declaring a residence outside of Canada as a Crown servant or with a family member who is a Crown servant.

Additionally, Canada just began accepting applications for proof of citizenship online. The offspring of Canadian citizens who were born abroad can use these documents to demonstrate their citizenship rights.

However, at this time, you can only apply online if:

If you don't meet the criteria above, you can only apply on paper now. However, the IRCC is working to make sure that more people can apply online in the future. Moreover, do not apply online if you've already applied on paper, as your application is still being processed.

However, to be eligible to become a Canadian citizen, you must:

Moreover, there are additional or different requirements if you are:

Furthermore, if you are a spouse of a Canadian citizen, you don't automatically become a citizen when you marry a Canadian. However, you must meet the same requirements (no exception).

The Oath of New Canadian Citizenship and Ceremony

Those permanent residents who do succeed in qualifying for Canadian citizenship will be among the first to take an oath that recognizes Canada’s indigenous peoples. “The oath of citizenship is more than words. It’s a declaration of belonging,” tweeted Immigration Minister Marco Mendicino earlier this year.

“The oath will now recognize First Nations, Inuit and Métis rights and treaties, fulfilling (the Truth and Reconciliation Commission) call to action 94 and ensuring new Canadians understand their important role in our past and present.” However, the words to the citizenship oath were changed through Bill C-8, An Act to Amend the Citizenship Act, on June 6 and came into effect the following day.

Under the previous oath of citizenship, new Canadians stated: “I swear (or affirm) that I will be faithful and bear true allegiance to Her Majesty Queen Elizabeth II, Queen of Canada, Her Heirs and Successors, and that I will faithfully observe the laws of Canada and fulfill my duties as a Canadian citizen.” But the Truth and Reconciliation Commission (TRC), whose mandate was to inform Canadians about what had happened when the residential schools were in operation, came back with a recommendation six years ago to change the oath of citizenship.

Moreover, in its six-volume final report to Canada’s federal government, the TRC made 94 recommendations after six years of hearing more than 6,500 witnesses across the country. However, Ottawa has decided to act on several of those recommendations. The change to the oath of citizenship, modified slightly from what the TRC had proposed, is one of those changes.

Who Has to Take the Oath

About 1 to 2 weeks before the ceremony, the IRCC will send you a notice with the date, time, and location. The ceremony will usually take place three months after your test.

Moreover, you should bring the following when you come to the ceremony:

What Happens at the Citizenship Ceremony

Furthermore, during the ceremony, you will:

A citizenship judge or official will preside over the ceremony and lead the Oath of Citizenship. Many people will take the oath with you. The ceremony official will say the oath in English and French. As a group, you’ll repeat the words to the oath after the official. You must repeat the oath in at least one of the official languages, but we encourage you to say them in both. You’ll also be invited to sing the bilingual version of the national anthem.

You can swear or affirm the oath. Swearing is for people who want to refer to their religious beliefs, and affirming is for people who don’t want to refer to a religious text. If you want to swear the oath on your holy book, bring it with you. Once you take the Oath of Citizenship, you’ll be a Canadian citizen. You’ll be given your citizenship certificate as proof that you’re a Canadian citizen. It will show the date that you became a citizen. Keep it in a safe place.

Study in the Netherlands for International Students

2022's Highest Paid Job Occupations: Get Ahead of the Curve