Companies in the Netherlands that Hire Foreigners in 2023

One of the most difficult parts about moving to another country is finding a job, especially if you don’t speak the language or have the local network needed to find one on your own. In order to make this process easier, we’ve researched some companies in the Netherlands that regularly hire foreigners and listed them below. You may want to reach out to these companies or contact them directly at the addresses provided if you are interested in finding work with them in 2023! 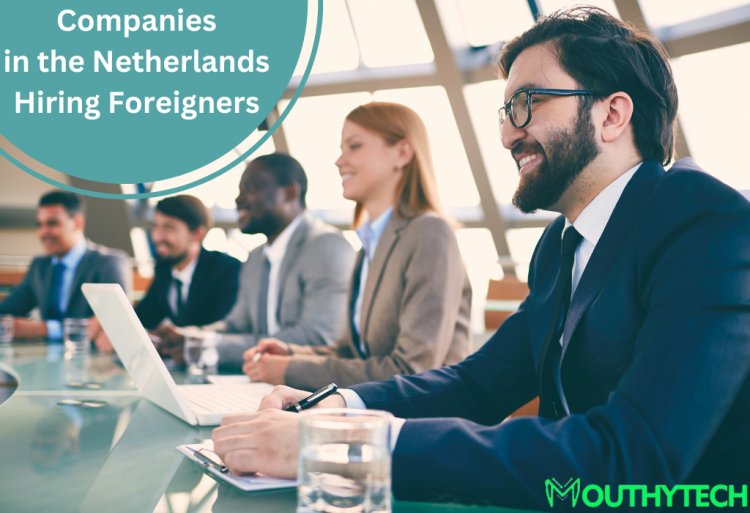 Employers adore the Netherlands and the nation's highly productive and skilled workforce. However, because of the open economy in the Netherlands, there is a high demand for foreigners. It's not difficult to locate companies in the Netherlands that hire foreign citizens while they are still in their home countries, but getting hired by these organizations is another matter. Another ballgame is finding companies willing to hire you when you have a relocation package.

The companies covered in this article are renowned Dutch companies that have been in operation for a very long time and operate in various industries, including agriculture, retail, and logistics. Getting hired by these companies has numerous advantages, from raising competence levels to increasing pay above the industry standard. These businesses advertise various roles, some of which do not require any prior work experience. So, everyone can find something here.

Companies that Hire Foreigners in the Netherlands

Here are 11 of the most prominent Dutch employers of internationals in the Netherlands so you can find the perfect job for you.

Despite having its headquarters in Amsterdam, booking.com has helped travelers worldwide find, compare, and book lodging in 228 different nations and territories. An international team of customer care and IT specialists working back at the Amsterdam office is essential to the website's flawless operation. If you haven't used the website, it links travelers with lodging options, air carriers, and vehicle rental agencies. Since the business has expanded from a one-man startup to a global website with 43 languages, it must be doing very well. In the Netherlands, 180 positions are open right now, many of which require foreign language proficiency.

ASML designs and manufactures lithography machines that help make computer chips. Based in Veldhoven, close to the technological center of Eindhoven, ASML is a top provider of equipment used to manufacture semiconductor chips. A whopping 13,000 people from 102 different countries work for the company in Veldhoven and Delft, further to the north. The company also provides relocation assistance, including temporary housing, furniture moving services, and a relocation budget to cover the move, due to the high percentage of international employees working for ASML. The majority of the 211 open positions at ASML in the Netherlands are in the design and engineering sectors.

In 2004, the Dutch multinational TomTom was one of the pioneers in introducing satellite navigation to the market. Since then, the company has expanded to include real-time traffic data and mapping for autonomous vehicles. 37 roles are now open at TomTom in Amsterdam and Eindhoven. The company is in desperate need of programmers, and TomTom frequently employs interns from outside who have just graduated from college.

With its headquarters in Amsterdam, Gemalto is the largest SIM card producer in the world and a pioneer in other smart card technologies such as contactless bank cards, e-passports, and near-field communications. In the Netherlands, using your OV Chipkaart to board a train constitutes using Gemalto technology. Although Gemalto is not actively recruiting in the Netherlands, it frequently employs grads, interns, and tech professionals of all shades.

A international telecommunications company with operations in six nations is Liberty Global. It has a small stake in Vodafone, Ziggo in the Netherlands, which serves four million users with mobile and broadband services. More than 50 roles, ranging from network engineers to business analysts, are now open at the company in and around Amsterdam. The organization is continually on the search for new talent. In addition, a 2017 LinkedIn survey ranked Liberty Global as the seventh most desired employer to work for in the UK.

Unilever, which owns more than 400 brands of food, drink, cleaning supplies, cosmetics, and personal care items, is a global powerhouse and the ninth most valuable company in Europe. Additionally, it has its headquarters in Rotterdam and hires a number of hundred new employees each month, some of them are based in the Netherlands. The organization is now recruiting in Rotterdam for positions in marketing, human resources, and research & development.

Shell, one of the biggest oil firms in the world and a mainstay of the US oil capital Houston, is fully owned by Royal Dutch Shell. The company has been consistently hiring globally, even in today's environmentally sensitive era, and is currently advertising 40 jobs in the Netherlands, several of which are situated in The Hague. The variety of employment available is broad due to the company's expansion into the fields of clean energy and biofuels. The energy company frequently adds to its roster of more than 11,000 Dutch-based employees, including carbon policy advisors, geophysicists, wind specialists, and legal experts.

Silicon Valley-based technology is the misery of yellow cab drivers everywhere. Around the world, Uber operates in around 800 major cities, and the Netherlands is no exception. However, the company's EMEA headquarters have been there since 2017 in addition to employing drivers and student bike couriers to deliver food in Amsterdam. In the Dutch capital, Uber is now hiring 77 individuals, including sales managers, accountants, product designers, and app programmers. Many of these positions need proficient French, German, and Polish speakers, so those who speak a second language are in luck as well.

Another Dutch company with a global presence is the industry leader in paint and coatings, AkzoNobel. If you've ever used Dulux paint to paint your home, Sikkens to respray your automobile, or Interpon to powder coat your dazzling alloy wheels, you've used AkzoNobel products. The multinational corporation also manufactures salt, chlorination agents, and industrial chemicals. There are numerous employment chances at AkzoNobel for foreigners looking for work in Amsterdam, Arnhem, Sassenheim, and Ammerzoden. The organization hires interns, just as Gemalto, and there is a current need for researchers, data scientists, and safety experts.

Undutchables, a multilingual employment board, offers positions in executive management, customer service, sales, marketing, logistics, IT, and finance. Since 2015, the company has placed foreigners in more than 1700 jobs. There are many different positions available, and the organization advertises in all sizes. However, they all share the desire to increase the number of talented foreign workers in their workforces.

How to Apply for Open Positions in the Netherlands

All applicants for opportunities at the companies above that hire foreign nationals must submit online applications through their websites. With the exception of one or two, the majority of them manage their own hiring rather than using third party companies for their recruitment.

We recommend that each applicant send a message to the human resource officer for the company or companies applied to to confirm receipt of application submitted after fully completing application forms on the corporate website and uploading any pertinent documents. We advise you to call the HR officer's phone number if one is provided to confirm that all submitted documents were received.

The Hiring Process for Companies in the Netherlands

After applications are submitted, each candidate should receive response letting them know that their application for an advertised position was received. These organizations receive a large number of applications and do not react to everyone. However, only those who are chosen for further consideration receive a follow-up email informing them of the hiring process's next step. The following step is typically an online interview, and if that goes well, actual copies of the submitted documents will be needed.

Getting a Work Permit and Visa to the Netherlands

If all necessary documents are presented on time and the work permit application is filled out correctly, it takes 5 weeks to complete and acquire a work permit. the approval of a work visa takes an additional two weeks. In seven weeks, both documents should be ready for pickup, at which point candidates can depart for the Netherlands. The primary applicant's family members must also get residency permits and visas for them to be eligible to travel.

Dutch business enterprises Foreign workers hired go through a rigorous process to ensure that the vacant positions are examined by the Dutch employment agency. Each company has an online application portal where candidates from all over the world may apply for these positions. Some Dutch businesses provide relocation packages to help new hires adjust more quickly by covering costs like housing, travel, and living expenses—at least for the first three months, by which time the employee should have established a foothold in the new nation.

When a relocation package isn't available, the principal applicant must provide evidence of their ability to support themselves financially in order to have their application for a work visa to enter the nation accepted. There are more prerequisite documents that must be provided in order for a work permit and visa to be accepted. Candidates should be aware that they can receive job offers from Dutch companies but be rejected when a work permit and visa application is made. When an applicant submits an application for a work visa in the incorrect category or with insufficient supporting documentation, this occurs.

Apply for Receptionist Jobs in Germany for Foreigners

Companies in the Netherlands that Hire Foreigners in 2023

In-Demand Jobs in Canada for Semi and Low-Skilled Workers

What are the Best Provinces in Canada for Job Opportunities?