Fastest Way to Immigrate to Canada

The Express Entry process, considered one of the quickest ways to come to Canada, is the most well-known immigration route, and it is all that most people are aware of. What if we told you there are two quicker routes to immigrate to Canada besides Express Entry? 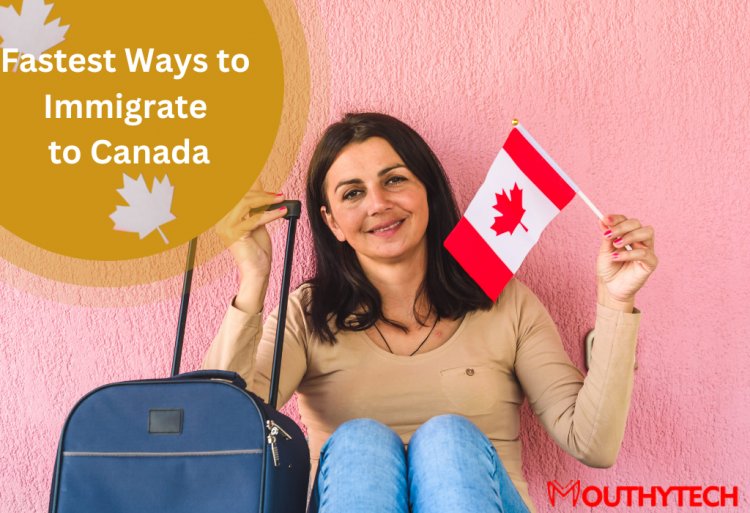 The process of immigrating to Canada is time-consuming and challenging, especially if you don't know where to begin or don't have the patience to scour through more than 100 immigration visas and programs to discover the right one for you. This article will look at the top 3 fastest pathways to immigrate to Canada.

Easiest and Faster Pathways to Immigrate to Canada

Here are the top three easy and fast ways to move to Canada:

Undoubtedly one of the quickest and most effective ways to immigrate to Canada is through the Express Entry System. It is simple to apply for permanent residency from anywhere in the world thanks to its online application process, which takes an average of 6 months for visa applications. Depending on your age, language proficiency, level of education, talents, and work experience, you can select between three federal immigration programs:

One fantastic feature of the Express Entry system is that it only requires you to set up an online profile once for the whole year to be put into drawings every two weeks. Then, apply through one of Canada's 11 Express Entry Linked Provincial Nominee Programs if you meet the requirements for Express Entry but have a job offer. Your application process will be completed in just six months, a reduction of roughly a third.

The Atlantic Immigration Program has modified its application process by enabling online work permit applications, and it now has a 6-month processing time as well! Through one of three programs, the AIP was created to help with Canadian immigration to Atlantic Canada, including Nova Scotia, New Brunswick, Newfoundland and Labrador, and Prince Edward Island:

To increase your chances of success in the application process, you should research which Atlantic Province has the most need for your occupation. Then, your chances of employment and obtaining a visa through the AIP will increase directly to your job's in-demand!

There is one province that is miles ahead of the other provinces. However, 11 of Canada's 13 provinces and territories have their own Provincial Nominee Programs, each of which has Express Entry Linked Streams with processing durations of about six months. Incredibly, the British Columbia Provincial Nominee Program (BC PNP) takes two to three months to complete visa applications! That is half the time for processing Canada visa applications compared to Express Entry!

This is because of its internet application platform, which is something that most provinces lack. You would typically have to apply directly to the province through the paper process, which may take anywhere between 15 and 19 months, to apply through a PNP using the non-Express Entry connected stream. The BC PNP draws more frequently than the Express Entry system, which is the cherry on top.

If you are a tech professional considering moving to Canada, you might want to look into BC Tech Pilot in British Columbia. One of Canada's IT hotspots, British Columbia, is constantly looking for qualified IT specialists to join its workforce.

Given that you would receive a temporary status, you may think this doesn't strictly constitute immigration to Canada and shouldn't be on the list, but bear with us. Obtaining a temporary work permit might take four to six months, depending on your nationality and the country from which you are applying. And work in one of the following industries and have at least six months of work experience. You could apply for permanent residence through programs like the Saskatchewan Work Experience Stream, primarily if you work in one of the following sectors:

There are also other possibilities, such as the Canadian Experience Class, which is administered through the Express Entry System and requires a year of work experience in Canada to qualify for applications for permanent residence.

Furthermore, if you are an extremely talented IT expert with at least five years of work experience, ask your potential employer about processing your application more quickly through the Global Talent Stream. It might take as little as two weeks!

Reasons Why People Immigrate to Canada

Many people consider Canada one of the world's best places to immigrate. Over 405 000 people made Canada their new home in 2021, and the Canadian government plans to welcome another 1.2 million new immigrants to the country by the end of 2024. But what is it about Canada that attracts so many foreign immigrants? What about Canadian life makes so many people desire to relocate there? We have prepared the fundamental reasons why people migrate to Canada.

The work economy in Canada is booming. However, the aging population and rapidly expanding key businesses have resulted in nearly 1 million job openings nationally! As a result, the Canadian government has established several trial programs to assist people in particular professions in immigrating to Canada as soon as possible and filling the gaps left by the local Canadian workforce. In addition, immigrants working in Canada must receive many incredible benefits, including pensions, paid parental leave, employment insurance, and even eye checkups.

Canada is a melting pot for cultures from all over the world due to their need for talented foreign immigrants to cover the gaps in the workforce and the Canadian government's and the public's inherently tolerant, open-minded mentality. Over 8 million immigrants live and work in Canada, according to Statcan.ca, the country's statistics agency. This represents more than 20% of all Canadians. In addition, over 170 nationalities have immigrated to Canada, which is also home to some of the biggest and oldest non-Western religious centers.

The quality of education in Canada is among the greatest worldwide. It routinely appears in the World Population Review's Top 5 List of Nations with the Best Educational Systems. In addition, the Institution of Toronto, the 20th best university in the world, is among the more than 32 universities in the country that are included on the Times Higher Education list of the Best Universities in the world.

With this level of education, it should be no surprise that, according to the World People Review, Canada has the most educated population. For Canadian citizens and permanent residents, all public education is free. Most Canadian schools, colleges, and institutions also provide excellent support networks to help overseas students integrate swiftly and successfully into the Canadian educational system.

Canada is one of the safest countries in the world.

Canada is regarded as one of the safest nations in the world because of its practical and dependable law enforcement, low poverty rate, and crime rate that, according to StatCan, is at its lowest level since 1965. People frequently praise Canada as a place where most homes don't require security systems, where most people park their automobiles anywhere, and where children may walk to school. Despite a minor increase in crime during the COVID-19 outbreak, Canada remains one of the safest places in the world to live, ranking sixth according to the World Population Review.

Canada's economy is highly stable and appears to continue because of a significant quantity of natural resource farming, booming industry, high tax rates, and a comparatively modest population rate. With a robust economy, Canada has one of the most stable societies in the world. Despite all the global concerns currently hurting Canada, the country's economy nevertheless appears robust.

It's no surprise that Canada came out on top of US News's list of the best places to live in the world, given the mix of its rapidly expanding economy, comprehensive public services, high earnings, comparatively low cost of living, and vibrant culture. When StatCan conducted its most recent survey of poverty in 2020, the country's poverty rate was 6.4%, the lowest it had ever been and still declining. Canadians have a great deal of acceptance, freedom of expression, and financial security. Canadian cities are dynamic and accommodating to a wide range of interests, yet they are encircled by some of the most extended unexplored wilderness areas.

Canadians are friendly. They are renowned for it. Even when they haven't done anything wrong, Canadians are famous for their passion for helping others, politeness, and apology. But unfortunately, people frequently make assumptions about why this would be the case, including that it has to do with the high standard of living, people's sense of safety, or the perception that you have to be warm to survive chilly Canadian winters.

Nevertheless, one of the significant advantages of moving to Canada is that most residents are always eager to assist you in adjusting to Canadian culture. In addition, the fact that refugees know they will be treated with the respect and kindness they lack at home makes Canada a popular destination.

Here are some of the frequently asked questions about the fastest ways to immigrate to Canada:

What is the quickest way to immigrate to Canada?

Express Entry is not just the most well-known immigration route in Canada but is also the quickest. Processing applications can take as little as six months. Nevertheless, based on your country, qualifications, and experience, other visa options may allow you to enter Canada more quickly.

British Columbia, Canada's western province, is characterized by the Pacific Ocean shoreline and mountain ranges. Natural sites like Glacier National Park have camping, hiking, bike paths, and more. In addition, it is the location of Victoria and Vancouver, two of Canada's best cities.

What is the best way to become a permanent resident of Canada?

The ideal option for you may differ from others because there are more than 100 Canadian immigration programs. Consulting an RCIC is a reliable way to determine which is perfect for you because they can tell you which one you're most likely to be eligible for. However, the Express Entry system is the most well-liked method of obtaining Canadian permanent residency.

How to get Germany Employment Visa Requirements and Application Proces...

How to Become an Australian Citizen in 8 Easy Steps