Top Engineering Colleges in Germany for undergraduate in 2023 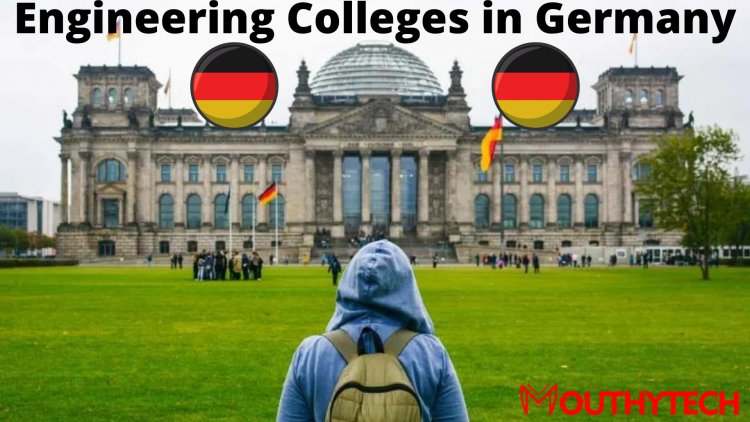 Germany is a popular destination for international students, and its Engineering and Applied Sciences schools are well-known for providing high-quality education. Germany provides high academic standards, free or very low tuition fees, and a wide range of job opportunities after graduation.

But where should you go if you want to pursue a Bachelor's or Master's degree in engineering? The best engineering schools in Germany are listed below, based on rankings from Times Higher Education and Top Universities...

1). The Technical University of Munich

The Technical University of Munich (TUM) is one of Europe's top universities. They distinguish between research and teaching excellence, interdisciplinarity, and talent development. There are also strong alliances with companies and scientific institutions worldwide.

Architecture, chemistry, civil, geo, and environmental engineering, education, electrical and computer engineering, informatics, life sciences, management, math, mechanical engineering, medicine, physics, and sport and health sciences are among the 13 academic divisions at the university. The university offers over 150-degree programs, with German as the primary language of instruction. TUM, on the other hand, offers more than a dozen programs taught entirely in English, as well as a number of bilingual programs, the majority of which are at the master's level.

The academic calendar at the university is semester-based. The Munich Center for Technology in Society, the Walter Schottky Institut for the study of nanotechnology and nanomaterials, and the Hans Eisenmann-Zentrum for agricultural sciences are all part of the university. The Erlenmeyer flask, a piece of chemistry lab equipment used to measure and store liquids, was named after one of TUM's founding professors.

The Technical University of Munich is reasonably priced. TUM courses have no tuition fees. Students are only required to pay semester fees, which include the Student Union Fee and a minimal Semesterticket (for public transportation). Over half of the university's student body is made up of international students from over 75 different countries. Admission to the Technical University of Munich occurs in two semesters: winter and summer. The admission offer is based on several factors, including language proficiency, GATE/GRE score, work experience, and work portfolio. Indian applicants planning to study at TU Munich must have a minimum academic score of 75%.

RWTH Aachen University is a German public research university in Aachen, North Rhine-Westphalia. It is Germany's largest technical university, with over 47,000 students enrolled in 144 study programs. In 2018, the university was ranked 31st in the world in the field of engineering and technology, and 36th in the field of natural sciences.

Since 2007, RWTH Aachen has been continuously funded as one of eleven (previously nine) German Universities of Excellence by the DFG and the German Council of Science and Humanities for its future concept. RWTH 2020: Addressing Global Challenges, as well as the follow-up concept The Integrated Interdisciplinary University of Science and Technology: Knowledge, Impact, Networks, as well as associated graduate schools and excellence clusters, will receive grants. In the most recent survey from 2018, the university consistently accounts for the highest amount of third-party funds among all German universities, ranking first per faculty member and second overall.

TU Berlin is a member of TU9, an incorporated society of the largest and most prestigious German institutes of technology, as well as the Top International Managers in Engineering network[14], which facilitates student exchanges between leading engineering schools. It is a member of the European Schools for Advanced Engineering Education and Research Conference. The European Institute of Innovation and Technology has designated two innovation centers at the TU Berlin. The Federal Ministry of Economic Affairs and Energy has designated the university as "The Entrepreneurial University" ("Die Gründerhochschule").

The university is notable for being the first to offer a Bachelor of Science in Industrial Engineering and Management (Wirtschaftsingenieurwesen). The degree was created in response to industrialists' requests for graduates with technical and management training to run a business. It is one of the oldest programs of its kind, having first been offered in the winter term of 1926/27. In 2019, TU Berlin had one of the highest proportions of international students in Germany, with nearly 27%.

Furthermore, TU Berlin is a member of the Berlin University Alliance, has been designated as a "University of Excellence," and receives funding from the German Universities Excellence Initiative.

The Karlsruhe Institute of Technology is a German public research university. The Helmholtz Association has designated the institute as a national research center. KIT was formed in 2009 when the University of Karlsruhe (Universität Karlsruhe), a public research university founded in 1825 and also known as the "Fridericiana," merged with the Karlsruhe Research Center (Forschungszentrum Karlsruhe), which was founded in 1956 as a national nuclear research center (Kernforschungszentrum Karlsruhe, or KfK).

KIT is a member of the TU9, an incorporated society of Germany's largest and most prestigious technological institutes. In 2006, KIT was one of three universities awarded excellence status as part of the German Universities Excellence Initiative. KIT was named one of eleven "Excellence Universities" in the following "German Excellence Strategy" in 2019. KIT is one of Germany's and Europe's leading technical universities, having established the first German faculty of computer science in 1972. KIT is the German university with the strongest research in engineering and natural sciences, according to various bibliometric rankings.

Under the direction of Ferdinand Redtenbacher, science-based mechanical engineering was established in the university part of today's KIT in the mid-nineteenth century, which influenced the establishment of other technical universities, such as ETH Zurich in 1855. The University of Karlsruhe received the first German e-mail on August 2, 1984. KIT has six Nobel Prize laureates and nine Leibniz Prize winners as of 2022. The Karlsruhe Institute of Technology is well known for producing many inventors and entrepreneurs, including Heinrich Hertz, Karl Friedrich Benz, and the founders of SAP SE.

The University of Stuttgart is a world-renowned research university in Stuttgart, Germany. It was established in 1829 and is divided into ten faculties. It is one of Germany's oldest technical universities, with programs in civil, mechanical, industrial, and electrical engineering, among others. It is a member of TU9, an incorporated society of Germany's largest and most prestigious technological institutes. The university is particularly well-known for its expertise in advanced automotive engineering, efficient industrial and automated manufacturing, process engineering, aerospace engineering, and activity-based costing.

In various international ranking surveys, such as the Academic Ranking of World Universities and the Times Higher Education Supplement, Universität Stuttgart is consistently ranked among the world's top universities. According to the QS World University Rankings, the University of Stuttgart is ranked 79th in the world in the field of Engineering & Technology in 2017. The University of Stuttgart is ranked 42nd in the world and third in Germany for mechanical, aeronautical, and manufacturing engineering and has been named one of Germany's top engineering schools on multiple occasions.

The University of Stuttgart is a significant contributor to Germany's 'Excellence Strategy' for top-tier research and has been awarded a seven-year research endowment for two 'Clusters of Excellence.' Data-integrated Simulation Sciences and Integrative Computational Design & Construction for Architecture are the clusters. The University of Stuttgart is concerned with students' overall development, not just academics.

The university campus is known for its sports arena, fitness center, and cafeterias, which create a lively atmosphere. At the university, sports meets, dance, drama, and music activities, art exhibitions, and other events involving cross-disciplinary participation are held regularly. Furthermore, the university organizes skill development workshops for students interested in cutting-edge technologies. It also maintains partnerships with industries to provide students with internships and placements. The mission of the University of Stuttgart is to create a better world through innovation and social integration.

That was a lot of information, but we've got more for you at Mouthytech. Mouthytech is the ideal place for you to accelerate your educational pursuits by assisting you in all aspects ranging from finding accredited courses to an ideal destination and a leading institution. The expert counsellors will guide you and make your dreams a reality.

Fastest Way to Immigrate to Canada

The Best Cities to Immigrate to the Netherlands

The Highest Paying Skilled Trade Jobs in Canada in 2022

The Ultimate Guide to Getting a UK Work Visa for Foreigner