What is the family based green card? | Family-Based Green Card, Explained 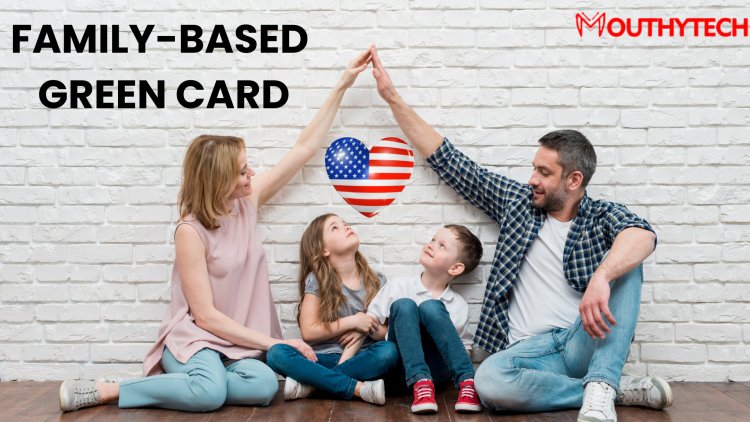 The ability to become a permanent resident of the United States through one's family is one of the most widespread ways that green cards can be obtained by individuals. These green cards make it simpler for people to immigrate to the United States based on their family ties, accounting for nearly two-thirds of the total number of green cards issued yearly.

Becoming a permanent resident of the United States grants you the right to reside and maintain a career in the country indefinitely. It is for this reason that green cards granted based on familial ties are among the most sought-after forms of permanent residency in the United States. However, before beginning the application process, several requirements must be met, which will be discussed in more detail below.

What Is a Green Card Based on Family Status?

A family-based green card is a type of immigrant visa that allows applicants to join their close relatives in the United States if they are eligible. If you are granted this type of green card, you will be able to:

However, there is a limit to the number of these visas that the United States Citizenship and Immigration Services (USCIS) can issue. If you apply and the limit has already been reached, you must wait until the following year to apply for your family-based green card.

Below, we will go over the difference between these two categories.

This type of family-based green card is issued to close relatives of U.S. citizens. For example, here are some of the relatives that can be considered:

This subcategory is meant for certain family members. Unlike the above category, things are a bit different here. Family preference green cards include:

The Submission of the Petition

Submitting an I-130 petition is the initial step in applying for a green card based on family ties. To apply for a visa, the family member who is a U.S. lawful permanent resident will need to send a petition on USCIS Form I-130 to the United States Citizenship and Immigration Services (USCIS) along with the required supporting documents (USCIS). It is necessary to submit Form I-130 to demonstrate the existence of a bona fide family relationship between the petitioner (LPR) and the beneficiary.

Following receipt of the petition, the United States Citizenship and Immigration Services (USCIS) will process the petition to determine whether or not all of the family-based green card eligibility criteria are met by the petitioner as well as the beneficiary. If the request is granted, the case file will then be sent to the National Visa Center so that it can undergo further processing. If the petition is turned down, the person who submitted it has the option of submitting it again after determining what adjustments need to be made in order to boost the likelihood that it will be approved.

After the I-130 petition has been granted approval, the case file of the immigrant will be sent to the National Visa Center (NVC) in order to undergo further processing. And if there is an available immigrant visa for the category, then the visa beneficiary will need to take the next step, which is either applying for a status adjustment or going through the process of consular processing, depending on which option is available. This will depend on whether the family member being sponsored is located in the United States or somewhere else in the world.

Change in standing or position

To complete this process step, you will need to submit Form 1-485 to the USCIS. Processing of green cards for family members already living in the United States of America After you have established a qualifying familial relationship with the help of the I-130 petition, this will be your primary application for a green card. It needs to be filled out, and all necessary attachments should be included. Applicants who are immediate relatives can submit both the I-485 and the I-130 forms at the same time, which indicates that their category does not have any numerical limitations.

This is for members of your family who reside in countries other than the United States. In this scenario, the approved Form I-130 will be sent to the relevant embassy or consulate in the nation where you (the beneficiary) currently reside. When the petition is received at the embassy or consulate, all parties involved, including the petitioner and the beneficiary, will be notified. In addition, the notification will include details on when and how you can move forward with the process of obtaining your green card.

During the subsequent process, the immigrant will be required to take part in a medical examination, in addition to filling out various forms and providing documents. The following steps include having a one-on-one interview with a consular officer to verify that you meet the requirements. The DS-260, also known as the Application for Immigrant Visa and Alien Registration, is the document that must be submitted for this.

Do Not Hesitate Any Further; Get Started on Your Application Today!

Do not hesitate to apply for a family-based green card if you have been on the fence about doing so. Through mouthytech, we will be able to assist you with the entirety of the application process in every way possible. We are aware that not only will you lose significant amounts of money but also the time and effort you have invested in this endeavor if anything is mistranslated or done incorrectly.

After you have determined whether or not you are qualified, it should not be difficult to start the process. However, it is essential to have support. Please get in touch with us right away if you have any inquiries or if you are prepared to start the process of obtaining a green card through your family.

Consult with an immigration lawyer before beginning the process, as this is one of the things you will be required to do. You don't want to put in all this effort and spend all of this money on an application only to find out later that you forgot to include some crucial documents or information! Follow the link below for further information on obtaining a green card based on your family's relationship.

Working as a Freelancer in Germany from A to Z | Applying for a Freela...

Bases Why Your US Visa May Be Denied

How To Get Around Australia on the Cheap: A Guide to cheapest flights,...